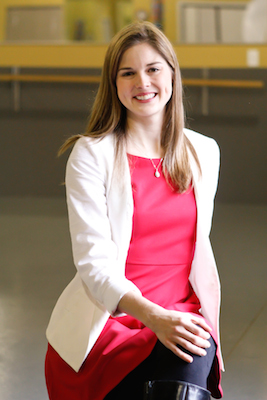 In 2007, she founded the Foster-Schmidt Dance Academy for Down Syndrome with Vince Schmidt. Charlotte expanded this program when she established the dance studio, Atlanta Dance Central, in 2009. Since 2007, Charlotte has worked with hundreds of students with special needs, both in her specialized classes and recreational program.  The Foster-Schmidt Dance Academy, which began as a weekend workshop, has now developed into the Physio Jazz program, with three levels of class, a dance company, and a fitness class.

Charlotte found her passion for students with special needs while assisting for the Jensen-Schmidt Tennis Academy for Down Syndrome.  Seeing the determination and joy on the athletes’ faces inspired Charlotte to start a similar program using dance as the main focus.  Here’s her story in her own words:  Why I founded Physio Jazz

In previous years, Charlotte has choreographed numerous pieces and shows; Luigi Project at the Atlantic Center for the Arts, Being (Interpretations of Interpretations) which represented the University of Georgia at the American College Dance Festival in March 2006, and Knowbody in 2007. Being received impressive feedback from noteworthy dance professionals: Ann Reinking, Steve Rooks, and Wendy Perron. Of the 48 pieces submitted, Being was one of 10 selected to be performed at the Gala Showcase. Her work was then also presented at University of Georgia’s Center for Undergraduate Research Organization Conference (CURO) and featured in the University of Georgia’s Journal of Undergraduate Research (JURO). Knowbody, another of Charlotte’s pieces, was created specifically for SIDEWAYS and it toured to New York City. It was recognized by TV choreographers, Brian Freidman and Mia Michaels, who deemed the piece “timeless” and commented on the honesty of both the choreography and the performers. Before moving to Athens, Georgia in 2004, Charlotte attended the University of Florida to pursue a Bachelor of Fine Arts degree in dance. While in Florida, she choreographed three full-length musicals, founded and directed Extreme Dance Company, and was chosen to be a member of the University’s Dance Team; the Dazzlers. Throughout the past ten years, Charlotte has taught ages two to adult: jazz, modern, tap, ballet, kinder dance, musical theatre, lyrical, hip hop, and voice.